This section explains the CANDAT software environment. You need to have a feeling for the following three areas:

GRASP (General Reporting and Application Support Package) is an environment which contains standard mechanisms for communicating between the user and the computer. This allows for consistency within applications and is the background within which CANDAT is defined.

The basic functional unit of an application is the task. There is a two level menu structure that directs the user to the task required. The first level lists general areas of the application., the second lists the tasks. We will use CANDAT as an example application to show menus. The first and A second level menu of CANDAT are shown here:

To choose a particular item in a menu just cursor down to that item and press Enter or type the first character ot the item. In this case, the “4” was pressed which immediately brought up the Recipe menu. Pressing Enter on the first item in the Recipe menu, in this case 400  Recipe file maintenance, essentially Task400 in the CANDAT system, would activate that task and bring up the following menu, a menu common to all the tasks.

Once a task has been chosen and it has been read in by the computer, the following menu is displayed:

At the end of a task, the same menu appears again. You can choose at this point to restart the task by choosing the first option again.

There are two ways to exit from CANDAT. One is temporary and leaves CANDAT in memory, ready to be reactivated. This is the EXIT to DOS choice. To return to CANDAT after choosing this alternative, simply type EXIT from within DOS and you will be returned to CANDAT. Do not try to start a new session of CANDAT if you exited this way. You will quickly use up all of your memory and may not be able to start another session if you do so. If you choose QUIT and return to the operating system, CANDAT is released from memory and terminates normally.

CANDAT prompts you for information in the form of a list of choices or tables. Lists are referred to as menus, not to be confused with menus used in restaurants. CANDAT will also prompt you for single field entries as in food codes, date of recalls, etc. An entry of a blank code or a 0 serves to cancel the prompt.

Reports produced by CANDAT can be sent to a printer, a file or both and, in the case of subject calculated data (task 340), to documented files. CANDAT is configured to print to LPT1 (or text files if you wish). The printer definition within CANDAT which ensures printing to LPT1 is called PRNTLPT1. It can be set in Activate System Utilities menu, under Activity Options menu. Activity Options is available as a menu item in each Module or Task selection menu as well as in the Task startup menu. This is explained in more detail under those menus.

In order to use your Windows printers you need a software such as DOS2USP which captures the LPT1 port.  It can be obtained here as a trial version and as a permanent version for a very low cost. The advantage of printing to Windows printers is that you can create PDF files from CANDAT output and be better able to manage the large volumes of data produced. A configuration of that program which works well with CANDAT is shown here: 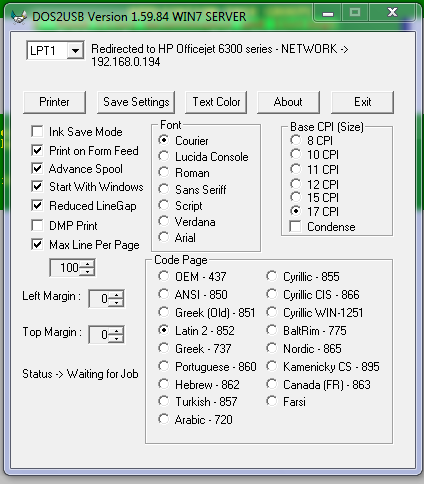 Once installed and these settings defined (do not forget to click on Save Settings) you can forget about the DOS2USP program. It will always be on your computer, will start when you start Windows and will just be used with CANDAT or some other DOS program you may have on your computer. Set it up once and forget about it.

CANDAT uses paper size to layout reports for printing. Please note that this paper size is independent from the one above. Paper size is a menu item under Activity Options (see above). Paper size is always defined in portrait mode, even if you wish to print in landscape mode (sideways). CANDAT determines the size of the report in relation to the size of the paper available. A few reports cannot print on paper 8.5 in. wide. These reports need to be printed on wider paper or need to be printed in landscape mode. When CANDAT detects this situation, it prompts you to change your paper definition so that it can continue. You must then switch to landscape (if you have landscape capabilities on your printer) or specify wider paper.

The DOS2USB program allows you to define the print device (which can be a .PDF file), the font and the font size to use for the report. This printer definition works in conjunction with CANDAT to provide the printed (or visual) representation of the reports. CANDAT defines the width of the report and the length of the pages based on its paper definition (see above). DOS2USB makes this definition fit on a page or on the screen.

Most of the reports in CANDAT are presented in a table form. A fixed font (such as Courier New) is preferable as it uses characters that are all the same width. An “M” has the same width as an “I”. A “1″ has the same width as a “0″. This allows columns of data and numbers to line up properly and be easier to read.  Font size is set here too. Please note that these sizes are in CPI (Characters per inch) and not in dots per inch as in windows. A larger CPI results in smaller characters and vice versa.  A bit of experimenting with the paper setups of CANDAT and the printer setups of DOS2USB will have you producing beautiful reports very quickly.

Most of the reports in CANDAT which can print on paper can also print to files. You are prompted for the file name and the file is created in your user area (see Structure – Users, below). Use eight characters only for file names, no spaces and no special characters. CANDAT will append an extension of .TXT to these files so that they are readily identifiable. All such files will be created in the user folder identified at CANDAT installation.

Output to save files

Reports that are the result of nutrient calculations can be output to files that you can either open with a word processor or import into a spreadsheet environment (like Excel) or adatabase environment (like SAS, SPSS or other statistical package) . You are prompted for a file name and different files are created using those names in your user SAVE area. Use eight characters only for file names, no spaces and no special characters. CANDAT will append various extensions to these files so that they are readily identifiable. All such files will be created in the user folder, sub-folder SAVE,  identified at CANDAT installation.

CANDAT is licensed on a per computer basis. CANDAT may be installed on only those computers and networks for which it is licensed. It is possible for multiple users to use CANDAT simultaneously when installed in a network. You are only allowed the number of simultaneous users negotiated in your purchase agreement.

Any one license (on one computer) can and is allowed to support any number of users. Users are created within CANDAT using a NEWUSER2 creation process. This process creates a folder for the user, specific to the disk (memory stick or other USB device) drive specified at creation. Note that CANDAT records the drive on which the user is created. Users must function on the drive specified at creation in order for CANDAT to be able to function properly. This is particularly important in a laboratory structure where users may connect their memory sticks to a USB port and create their own environment. CANDAT creates an icon with the particulars of the user drive. A user can manually change the drive in the properties of this icon to correspond to the drive of their memory stick, if used on another computer. For instance, a user could create an environment on their memory stick under the  “F” drive in the laboratory environment and then need to use it on the “G” drive of another computer.

User folders store food files, category files, subject files, questionnaire files, save files, and recipe files.  For a user to use another user’s files, those files must be copied to the relevant user folder. There is no user identification on the files themselves. This structure also allows the same (project) name to be used for each of the food, category, subject, etc. files. Please note that the user structure and files is never deleted by CANDAT or by re-installation of CANDAT. It is always prudent, however, to fully backup the user structure and its files.

CANDAT has a unique structure for Users and for Food files. The actual work performed by CANDAT is organized in a structure of Modules and Tasks.

Tasks are found within modules and provide the detailed interaction with the User. It is within tasks that subject data is entered, recipes and food files are created, nutrient data is calculated, reports are produced, etc. The titles of the modules are self explanatory as are the titles of the tasks. Follow the prompts within the tasks and you should be able to accomplish your work with ease.

What our users say